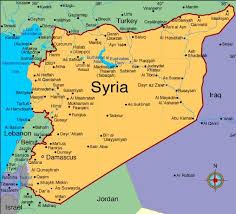 CARACAS, (SANA) – The media delegation from Venezuela and Latin American countries which visited Damascus recently held a press conference organized by the Syrian Embassy in Caracas on Thursday to discuss the results of their visit to Syria.

The media delegation said that Syria is facing a war waged by an international coalition, and that this has nothing to do with the slogans of freedom of democracy as the western media is distorting the evens in Syria.

The journalists said that their visit’s goal was to tell the world about what is really happening in Syria away from the lies and libel which characterizes many media sources’ coverage of Syria.

They spoke about their field visits and their interviews with Syrian citizens, stressing that Syria is strong and that media talk about its downfall is mere dreams.

The delegation members stressed that what is happening in Syria is not a civil war as some countries and the UN are claiming; rather it’s a real war between Syria and an unprecedented international alliance.

They underlined the negative role played by the UN through its silence over the terrorism affecting Syria.

One of the journalists said that he covered many conflicts around the world, including those in Afghanistan, Iraq, Libya and Egypt, asserting that what happened in these countries is completely different from Syria.

The delegation members focused on the lies and hypocrisy of media outlets regarding the events in Syria, saying that what they witnessed in Syria proves that western media is waging the largest media war in its history.

They affirmed that there are extremist terrorist groups fighting in Syria without cause or a political agenda, noting that they were worried about going to Syria but upon arriving and seeing the truth they were reassured.

The journalists lauded the steadfastness of the Syrian people and their love for life, adding that the Syrians they met told them that they don’t want freedom and democracy from countries that know neither, asserting that Syria has not fallen and will not fall because of its resistant people, wise leadership and strong army.

They also lauded the Russian and Chinese role regarding the events in Syria.