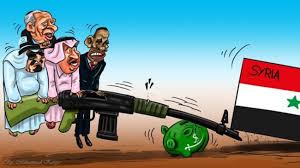 A joint military exercise scheduled to take place in Jordan next week is aimed among other things at readying forces for a possible intervention in Syria, Western officials told Ynet on Tuesday.

The drill will include battlefield, logistics and humanitarian exercises for troops from Britain, Bahrain, Canada, Czech Republic, Israel will not take part in the drill but will continue its “red line” policy against arms shipments to Hezbollah.

According to one western official, forces will remain on the ground after the drill “in case the need will arise to intervene in Syria.”

The maneuvers are set to run for two weeks in the Jordanian army’s training fields, schools and centers.

”Without a doubt this year’s drill will prepare for a possible conflict with Syria,” a Jordanian official told Ynet.

“Jordan must prepare for any abnormal development on this front.”

Jordan fears that Syria’s disintegration could threaten stability in the Hashemite Kingdom.

Both Jerusalem and Amman fear that the hundreds of Syria that would be enforced by the US and other countries such as France and Britain The Daily Beast reported.

In interview with Hezbollah TV station, Syrian president says next shipment of anti-aircraft missiles due to arrive ‘soon’; states his government would not stand in way of groups ‘that will want to fight for liberation of Golan’

Syria Promises to Retaliate if Israel Attacks Yet Again

In a meeting with European Union ambassadors, Israeli National Security Advisor Yaakov Amidror declared the Syrian government’s imminent acquisition of S-300 anti-aircraft missiles to be a “red line” that would obligate Israeli military action to prevent them becoming operational.

Army official: Israel ready to fend off attack from Syria.

Israel tracks every heavy missile fired in the Syrian civil war, keen to study Damascus’s combat doctrines and deployments and ready to fend off a feared first attack on its turf, a senior Israeli military officer said on Thursday.

Colonel Zvika Haimovich of the air defense corps said southward launches against Syrian insurgents by President Bashar Assad’s forces gave Israel mere seconds in which to determine it was not the true target – a distinction that could prove crucial for warding off an unprecedented regional conflagration.

“Syria’s batteries are in a high state of operability, ready to fire at short notice. All it would take is a few degrees’ change in the flight path to endanger us”

Special French forces in Jordan readying themselves to intervene in Syria

Seven members of Syria’s al-Nusra Front were detained in southern Turkey – had 2 kg of sarin gas in their possesion.

Turkish security forces found a 2kg cylinder with sarin gas after searching the homes of Syrian militants from the Al-Qaeda linked Al-Nusra Front who were previously detained, Turkish media reports. The gas was reportedly going to be used in a bomb

The sarin gas was found in the homes of suspected Syrian Islamists detained in the southern provinces of Adana and Mersia following a search by Turkish police on Wednesday, reports say. The gas was allegedly going to be used to carry out an attack in the southern Turkish city of Adana.

ANKARA, Turkey (AP) — Turkey’s military on Thursday returned fire after shots were fired at an armored personnel carrier from across the border with Syria.

A military statement said a group of around three to five people from across the border fired up to 15 shots toward the vehicle that was patrolling an area near the Orontes river, on the frontier. Turkish state-run TRT television said no one was wounded and the military said the group escaped and “disappeared from view” when it fired back.