A senior NATO official told former NSA intelligence analyst John Schindler that the world would “probably be at war” sometime this summer.

“We’ll probably be at war this summer, if we’re lucky it won’t be nuclear,” the official told Schindler last week.

Although the tweet was retweeted over 400 times, the comment garnered no mainstream media attention whatsoever, which is odd given that Schindler is a former U.S. Naval War College lecturer and is known to have many high level military contacts.

END_OF_DOCUMENT_TOKEN_TO_BE_REPLACED

(globalpost.com) Korean army said it has final approval to launch “merciless” military strikes against the United States, including the use of nuclear weapons.

In a statement published by the North’s official KCNA news agency, the General Staff of the Korean People’s Army said the United States had been formally informed that its “reckless nuclear threat” would be “smashed by strong will of all the united service personnel… and cutting-edge smaller, lighter and diversified nuclear strike means,” according to Reuters.

“The moment of explosion is approaching fast,” the statement reads, warning that war could break out “today or tomorrow.”

“The merciless operation of our revolutionary armed forces in this regard has been finally examined and ratified,” it read.

According to South Korean news agency Yonhap, the statement also said the North would “take a series of strong, actual military countermeasures as the Supreme Command solemnly declared at home and abroad.”

US Defense Secretary Chuck Hagel said on Wednesday that the hermit kingdom’s threats presented a “real and clear danger” to the United States and its allies, South Korea and Japan.

The Pentagon confirmed earlier on Wednesday that an advanced ballistic missile defense system was being sent to Guam to protect US interests as a precaution against North Korea’s threats.

Also on Wednesday, the North barred South Korean workers from the joint Kaesong industrial park. Earlier in the week, Pyongyang said it was restarting the Yongbyon nuclear reactor to step up production of nuclear weapons materials.

The North has condemned the US deployment of advanced weapons such as B-52 and B-2 bombers, F-22 fighters, and a nuclear-powered submarine and destroyer to the Korean Peninsula for annual joint military drills with the South, Yonhap noted.

March 30, 2013 – NORTH KOREA – The order came after US Defense Secretary Chuck Hagel said Washington would not be cowed by Pyongyang’s bellicose threats and stood ready to respond to “any eventuality.” Mr. Kim directed his rocket units on standby at an overnight emergency meeting with top army commanders, hours after nuclear-capable US B-2 stealth bombers were deployed in ongoing US joint military drills with South Korea. In the event of any “reckless” US provocation, North Korean forces should “mercilessly strike the US mainland … military bases in the Pacific, including Hawaii and Guam, and those in South Korea,” he was quoted as saying by the official Korean Central News Agency (KCNA). While North Korea has no proven ability to conduct such strikes, Mr. Kim said: “The time has come to settle accounts with the US imperialists.” Meanwhile, Dylan Harris, director of Lupine Travel, which specializes in holidays to unusual places like Iran, Chernobyl and Siberia, received an email on Friday morning. It said US stealth bomber flights over the Democratic People’s Republic of Korea (DRPK) had made the situation “critical with the outbreak of war probably only hours away.” It was not clear who the email was from. –Telegraph

War with N. Korea would be ugly in opening hours: Prominent North Korean analysts, citing what they see as increasingly troubling signs coming from the dictatorial regime, have voiced concerns that its new young leader, Kim Jong-un, could do something ill-advised and even start a war with the US. On Friday North Korea renewed what the U.S. has condemned as its ‘bellicose rhetoric’, saying Kim had ordered the nation’s missile forces to prepare to strike the United States and South Korea. According to the Christian Science Monitor, in response to the prospect of North Korea following through 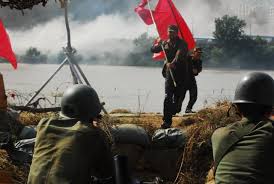 on this and other marginally less dire threats, Defense Secretary Chuck Hagel said that the US military “will unequivocally defend, and is unequivocally committed to the alliance with, South Korea.” Some former US Special Operations Forces and longtime Korea defense analysts have their own thoughts on what an ‘unequivocal’ US military response could look like. That includes how US troops would be deployed in the event of a lethal first strike on US and allied military forces by North Korea – precisely the sort of move Kim has been threatening to make. Patrick Cronin, senior director of the Asia-Pacific Security Program at the Center for a New American Security, said that should Kim choose to do “something even more outlandish,” the US military and South Korean response would be more dire. Retired Brig. General Russell Howard, former commander of the 1st Special Forces Group, which has an Asia focus, said that should Kim decide to begin firing them, he says, “in the first few hours of the conflict, it would be pretty ugly.” At the same time, North Korea could begin “swarming” its sizable contingent of 600,000 Special Operations commandos, Howard added, now the director of the Terrorism, Research, and Education Program at the Monterey Institute of International Studies, the report added. –Zee News